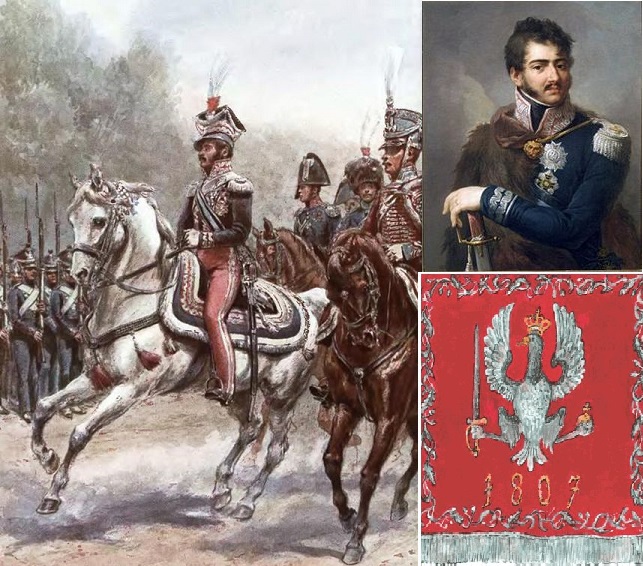 Terrain for the 2010 Gathering in the Desert

Last year I supplied a rubbled "Osgiliath" table for the Gathering in the Desert Lord of the Rings tournament. I received an award for the table which consisted of a nice kit from Hirst Arts. After much procrastination I finally broke down and had Tim K assemble the piece. I just got it back last week and added some rubble to it and just got done priming it. It will be part of a slightly modified "Osgiliath" table at this years GITD next month...many of the same pieces as last year will be there, but it will be reconfigured somewhat.

When I won that Hirst Arts piece, I got thinking about another table I could do at the same time I got thinking about what army I'd like to field. Since I all ready had a Rohan force and had some figures to start an Uruk-hai scout army, I figured I'd do a Rohan settlement. The settlement will have consist of pieces mainly from Old Glory, JR Miniatures, and Pegasus Hobbies along with some scratch built pieces. I spent this morning priming everything using Krylon Ultra-flat black and Ultra-flat brown (for the tree armatures). Now I just have a month to finish it! The good news is that I like painting terrain and can bust through it pretty quickly once I get it primed and ready to go. The hardest part will be the trees which I'll seperate into smaller groups, glue to bases (which will need additional detailing) and flock with leaves.

Here are some pics of what I have to tackle: 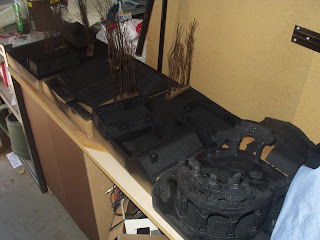 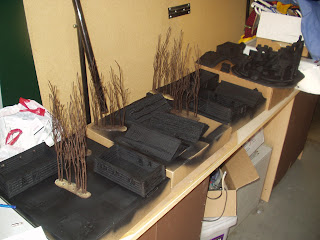 Well, I can cross one of my "to do" items for 2010 off of the list...I finished up my Uruk-hai Scout Army up for Lord of the Rings. It also has some Dunland Allies with it. I was actually done a few weeks ago, but was under the weather and finally got around to takeing some quick pictures. So, here they are:

Sharku, some Orcs (for dismounted Warg riders), and some scouts 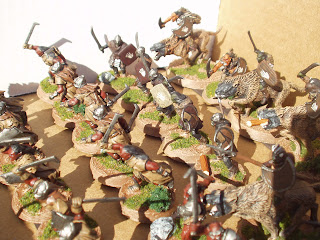 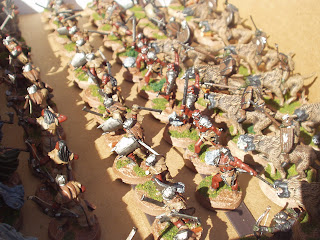 Scouts and Warriors of Dunland 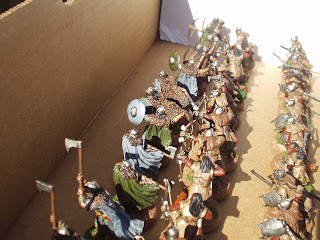 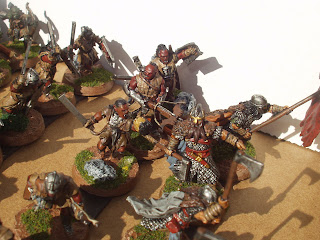 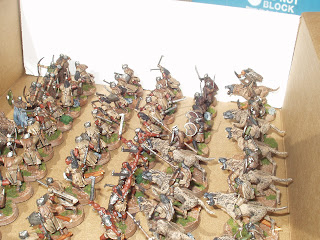 Now, there is over 600 points here and I have a few different list options that I've come up with. I have tested one list and I have a game scheduled tomorrow with Tim K and I'll try another one then. I still have some time to figure out how to configure the army, so that's good. I do feel that, like last year when I ran my all mounted Rohan force, I'm bringing a knife to a gun fight.

Labels: Dunland, Gathering in the Desert, Lord of the Rings, Uruk-hai

Well, the New Year and New Decade is here and though I haven't been updating this blog much I have actually been doing some gaming related activities. I had a target date of December 31st to finish off my Uruk-Hai scout army for LOTR, but I'm going to be a little behind on that...maybe this weekend...the reason I'm mostly behind is that I decided to do up another box of Warg Riders that I won at the Gathering In the Desert Primer event. So here's my "plan" (subject to change at any time, of course!) for 2010:

1-Finish the Uruk scouts for LOTR: I plan on taking pics and posting them next weekend.

2-Do a bunch of buildings from Old Glory and JR Miniatures, along with some accessories from Pegasus and a piece from Hirst Arts; I want to get this done by the end of January or so because I'll need this stuff for a couple of tables I'm supplying for the Gathering in the Desert.

3-Touch up and rebase a bunch of 15mm Napoleonics I got in a trade. I traded off a 25mm Early Imperial Roman army for these troops since some of the local guys have started playing Napoleon's Battles and Shako II. I'll likely trade/sell off the Russians I got so I can expand the French and Poles I have.

4-Finish up the 15mm DAK trucks for my FOW army.

5-Finally finish up the chariots for my 25mm Mitanni army for WAB.

6-Get some figures suitable for 40k Stormtroopers to add to my Daemonhunter Army.

7-Start on a Warhammer Fantasy Army: I have a large number of Dwarf Wars figures that I can proxy as either an Orc army or an Empire army based on how they are armed, but lately I've been thinking of starting either a Skaven or a Dark Elf army instead.

8-Start on another 40k army: I have my Grey Knights and I think I will start off by adding IGuard and Space Marine allies with possibly expanding these to full blown armies in the future. I'm also interested in Eldar and Dark Eldar though too...

9-Finish off and base up a 15mm Marian Roman army that was painted by Philgreg painters in Sri Lanka. This is for Might of Arms...a good game which I hope to play more of this year.

10-Commit to one "new" game...I'm thinking this will be Uncharted Seas, but we'll see.

That's all for now...hopefully I'll have the time (once my son's basketball season is over with at least) to update the blog more frequently.